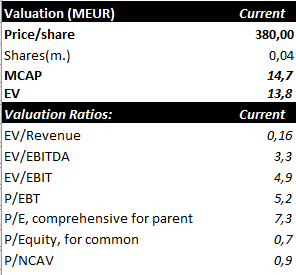 As seen from the table, the company is profitable, has high ROIC and there is no clear trend down on revenues or profits:

The FCFF was used mainly to pay down debt: 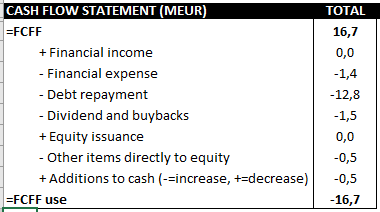 As there is no clear trend up or down in the business, the last five year average profit might be good predictor of the next five year’s average profit. If so, then valuation at about book value seems realistic, because the ROIC>WACC.

Assuming rerating of the valuation multiple from the current P/B 0,7 to P/B 1, and the current profit level, the IRRs would be more than satisfactory in up to five-year time frame:

If the multiple would rerate in one year the IRR would be 60 %, and if it would take five years IRR would still be 17 %.

Time is friend of the wonderful company but valuation of the mediocre. In Cofidur’s case, the problem from return perspective would start only if the rerating would take more than say six years.

The IRR forecast is based on assumption that the future profits stays at the current profit level and that the management uses the subsequent cash flows on NPV+ projects and respects minority shareholders. Is there reason to believe otherwise?

Biggest sources of trouble in electronics subcontracting are customer and product concentration. These especially in case of fast products cycle products like consumer electronics.

Cofidur attributes 41 % of revenues to “industrial and professional” sector, 37 % to “LED” sector, 24 % to “aerospace and defense” sector and 18 % to “after sales service” but there is no details of exact products or customers. 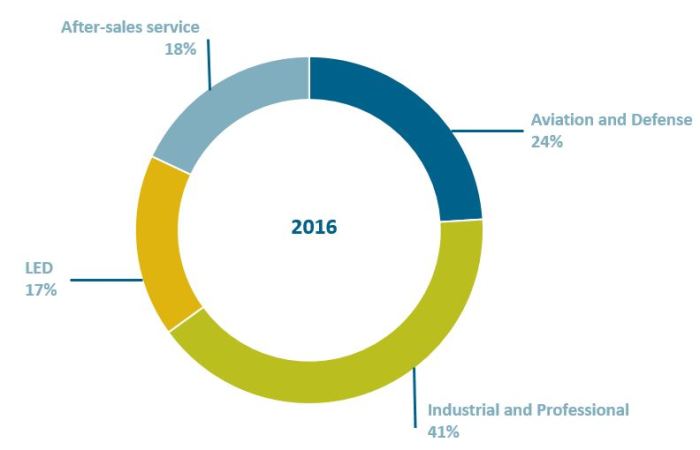 It’s difficult to say anything conclusive of the potential customer and product risk based on the data available. The price below NCAV implies quite a lot of pessimism towards Cofidur’s future so watching this case from Nordics as non-French and non-French speaking person raises serious questions what I might be missing?

From the data it can be inferred that Cofidur is likelly to have at least three customers in three different sectors, but it could also be more given the variety of “extensive experience” the company sites:

No more than three customers would risky but one would be even worse. For example Finnish electronics subcontractor Elqotech went bankrupt having served only Nokia, while other Finnish subcontractor like Scanfill has survived for decades with more diversified customer base.

Is there contracts coming to end or customers moving their production from France to lower cost countries, that locals living near the manufacturing plants (which are probably close to the main customers) would know?

One might speculate that the aerospace and defense related products are more complex and longer product life cycles and thus that the customer relationships are more deep and longer term in nature than in the “industrial and professional sector”, which probably refers to the simpler and shorter product cycle “high volume” set-top-boxes and modems.

One might be also totally wrong and all contracts end tomorrow. But since the company has been in business 30-50 years (there are mixed data at the website) perhaps the conclusion is that the company knows how to manage product and customer risk.

The answer to the product and customer risk is quite impossible to know with my available resources, and it might be insider information anyway, but as seen from the IRR table earlier, if the risks won’t materialize, and the business continues to hum along at the historical pace, the returns should be quite satisfactory.

And good thing for portfolio investors is that if the company doesn’t diversify its risks the investors can do it by himself.

As there is no evidence of the business dying soon (at least I don’t have it), and the balance sheet is strong, the only potential problem left is the management.

Cofidur’s main owner is EMS finance with more than 50 % of the shares.

EMS had about 11 % ownership but became the 50%+ owner in 2009 during take-over attempt by Eolane Group, after first declining the take-over offer and then using their “right of first refusal” option in shareholder agreement with the other two big owners at the time (ESCA and Calyon), who did accept the take-over offer:

Since then, Cofidur’s capital allocation seem to have been quite savvy:

As a result, Cofidur turned around and started to make a profit, it only has subs that have more or less always been profitable (at least back to 2009, last year I checked), it has net cash position and significantly reduced share count (purchased at bargain prices).

There are few negatives though:

1) Last year management reverse splitted the shares so that each 200 shares became 1 share.

If I did understand this correctly, if you didn’t have the full amount of shares the broker automatically sold the non-full amount to the market.

Basically it was thus possible that you lose some value, especially for small investors.

And the reason for the potentially bad deal for minorities was bonkers; desplit because “high volatility of the stock” and to “stabilize the long-term ownership” of the company????

2. The era before EMS became the main owner and the old main owners (Caylon and ESCA) left (2001-2009) is really hairy including at least accusations of looting the company by somebody and issuance of LOT of warrants and other complex transactions for someone else, where EMS seem to have been involved somehow (EMS people seem to have been in management roles of Cofidur from at least early 2000s).

The French is so difficult that I cannot get my head around if the transactions were fair for minorities.

While the last nine years has been good for shareholders and the dividend payment implies that minorities get to share the fruits too, I would not be comfortable in taking big position in a stock if there would ever had been clearly unfair activities conducted by the controllig shareholders.

If there were problem though, I wouldn’t think the current owners would have left all 20 year old documents (annual reports and stock exchange releases) for everybody to read today, so they seem to be OK what’s in there.

Cofidur is profitable, dividend paying company selling under 5xEBIT and below NCAV and 0,7x BV. If stock rerates to P/B 1 in few years IRR will be satisfactory.

The problems are customer concentration and potentially, but not verified, corporate governance problem. The first you can diversify but the latter you would preferably avoid.

Currently I’m long the stock with 3,7 % position but feel that with my portfolio size it’s too trivial to matter. While having the “starter” position, I’m trying translate the 2001-2009 finacial reports to find out the history of the current main owner.

If I get green light I would be willing to at least double up the position but potentially even go up to 10 %. If I blow up before that, at least it was good practice for my first French class I’m having (half way through).